Thank you, Jesus, for this beautiful morning.

I graduated from Hillcrest High School in the spring of 2003 with a ton of honours, trophies from speech and debate, a great ACT score, a full-ride scholarship to Missouri State, and a lot of excitement about moving out of my mom’s house in the near future.

And then I discovered that I didn’t know how to study, I didn’t know nearly as much as I thought I did about everything, and in retrospect, I certainly didn’t know how hard it would be to finish. I lost my scholarship, dropped out for a while, and when I came back, it was with the sole goal of finishing up and getting that piece of paper. 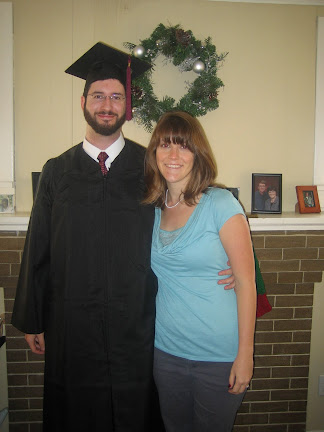 I went to college without a plan. It was the thing to do after high school, and since I didn’t know anything else to do, I went with it. I majored in religious studies on a whim, because I liked studying religion, and in retrospect I probably should have done something else. Meteorology, or Professional Writing, or maybe Antiquities.

But it worked out. I learned a lot about critical thinking, and research, and writing. RS taught me more about writing than Creative Writing did, and I met some great people. Most of my teachers were terrible because, for the most part, only terrible adjuncts get conned into teaching night classes, but I’m glad I did it.

I could have gone to Duke, or Cambridge, or even Mizzou and probably have gotten a better education. I could have studied Antiquities and been happier, or a science and made more money. But a few weeks ago, I decided that regardless of what could have been, I’m happy now. I’ve got a phenomenal life, and I’m happy, and that’s all that matters.

If you want to know why I do like religious studies, check out this article: Why The World Needs Religious Studies. 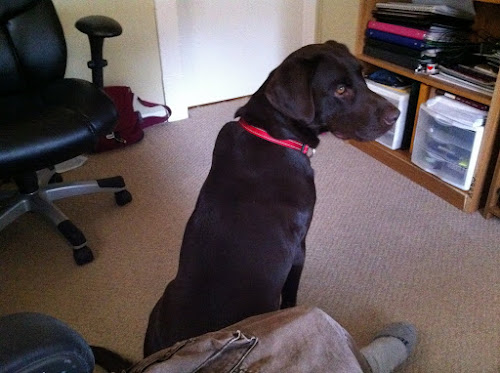 One of my first pleasant memories was of a dog. My parents got me a Siberian Husky mix when I was about 3, and Cocoa Bear was a great dog… until he broke his line and ran away. Years later, my mom and I adopted a Miniature Schnauzer named Pepper, who was also pretty great. When I went to college in 2003, though, I had to leave pets behind.

When April and I bought a house in 2008, I got April two kittens, and we had pets again. I like cats, and we finally get along well now that they’ve grown up. But part of me wanted a dog to go outside with, and play with, and who actually payed attention to me when I wanted it to. Between night classes and working all day, though, I just didn’t have time.

We have been planning for a few months now, and last Saturday we went to the Humane Society and found a new family member. Willow is a chocolate lab and, much to our surprise, is an AKC certified purebred dog. She was returned to the Humane Society in November from a family that tried to adopt her but couldn’t deal with her high energy levels, but we haven’t had too much of a problem. I wanted someone to go walking and jogging with, and we’ve been training and working with her pretty consistently, so while she acts up now and again she’s doing really well for having lived with us for less than a week. And she’s already housebroken and crate trained, so that helps.

We’re going to April’s parents this weekend, which will be her first long car ride, but we got a car harness that buckles to the seat belt and she did really well on a short ride last night, so that should be fine. Overall, she’s pretty swell, and she loves attention and being loved, which is nice.

For some reason, though, it didn’t occur to me that this might be a problem since I’m a hardcore introvert. As she has gotten more calm and confident, though, she’s relaxing and isn’t as demanding, so that’s helping.

For those wondering, yes, I am going to continue working at the University. I like my job, and it’s going well. I don’t know why people expect me to go find a new job just because I have a degree now. There’s certainly no profession that looks for degrees in Religious Studies.

I’m writing a training manual for PAX East Enforcers, and hopefully my ink will be here soon so I can start writing by hand for my new hobby of letter-writing. If you’d like to be pen pals, let me know and we’ll set that up.

Oh, and in case you’re friends with me on Facebook, be aware that I’m deleting that soon. I’m tired of all the privacy issues with it, and I much prefer Google+ for sharing stuff and posting pictures. I’m on both G+ and Twitter, so you can find me there or here, but I’m done with Facebook.

I have a couple more weeks of vacation before I go back to work, so I’m going to keep enjoying them with SWTOR. Hopefully not having class three nights a week will also result in more blogging, and it is certainly going to result in more time spent with people.